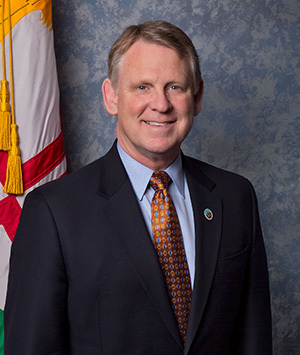 Allan H. Kittleman was elected Nov. 4, 2014 to serve as Howard County’s 9th County Executive. From 2004 to 2014, Kittleman had served in the Maryland General Assembly as the Senator representing District 9. From 1998 to 2004, Kittleman represented Council District 5 on the Howard County Council.

Kittleman was a partner with Herwig & Humphreys, LLP before serving as Of Counsel at Godwin, Erlandson, Vernon & Daney, where his practice concentrated on representing employers in worker’s compensation matters.

During his tenure in the Maryland General Assembly, Kittleman was known as a bipartisan, independent leader and tireless advocate for many legislative causes, including strengthening Maryland public schools, stimulating economic growth and increasing transparency in government. He demonstrated particular dedication to legislative matters involving civil rights, fairness and equity.

Improving the delivery of human services, closing the education gap and rebuilding aging infrastructure are among Kittleman’s top priorities as Howard County Executive. He has focused efforts on the revitalization of older communities, including the Long Reach and Oakland Mills village centers and sections of the Rt. 1 corridor. He is committed to open and transparent government, launching the county’s first open data portal and holding regular town hall meetings and roundtable discussions to gather public input on various issues.

Spurring economic development, encouraging businesses to expand or relocate to the County and maintaining a healthy tax base continue to be top priorities. Kittleman believes county government can provide top-notch services without burdening residents with unnecessary fees and tax increases, Howard County’s unemployment rate is among the lowest in the state and its commercial occupancy rates among the highest.

He and his wife Robin live in West Friendship. They have four children – Haley, Mary, Robby and James.