The Columbia Pro Cantare is a mixed chorus of over 100 volunteer singers which seeks to present the finest choral music to a growing regional audience. Columbia Pro Cantare is a nationally recognized mixed chorus of auditioned volunteer singers based in Howard County which seeks to present the finest choral literature in concerts of high artistic quality to a growing regional audience. It aspires to provide enriching musical experiences for musicians and non-musicians alike

Since the Spring of 1977, the Columbia Pro Cantare has delighted Howard County and metro area audiences with its concerts of music ranging from the classics of opera, oratorio, and the concert stage to American and European folk and spiritual music. Founded by Director Frances Motyca Dawson, as a professionally trained volunteer chorus to sing nine times with the Baltimore Symphony Orchestra at its Howard County concerts and to bring high quality musical experiences to local audiences with its own independent performances, CPC has more than fulfilled its purpose over the thirty-six years.

Inspired by Jim Rouse's vision of Columbia as a place where people could grow and find expression for their artistic talents, Frances Dawson has built a choral group described by the Baltimore Sun as "one of the elite choirs in Maryland" and by the American Record Guide as one of the choral groups that are the "musical hubs of their communities." Not only has the Pro Cantare performed vocal and choral compositions from the 10th to the 21st centuries, but it has presented concerts devoted to the music of such diverse cultures as Polish, Swedish, Czech, Hungarian, Irish, Jewish, Latin-American, American popular, folk and classical, and - especially in three European concert tours, the final concert of the 2001-2002 season, and the 2009 Tribute to Paul Robeson - African American. In addition, CPC has performed 14 world premiers, (12 of which were commissioned works of Maryland composers) and 16 U.S. premieres of primarily East European works of outstanding quality from lesser known composers. Most of these latter were retrieved from Czech archives through Mrs. Dawson's efforts both before and after the fall of communism. On October 28, 1998, the Columbia Pro Cantare was privileged to present a concert of Czech music featuring the Jazz Mass of composer Karel Ružicka at the Washington National Cathedral to commemorate the 80th anniversary of the founding of the Republic of Czechoslovakia in 1918. 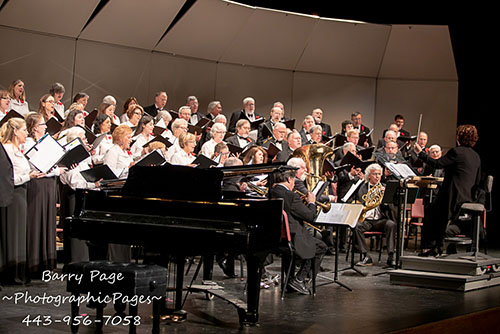 CPC has given more than 12 free or benefit concerts in its lifetime. These range from one of its first concerts, which benefited St. John's Catholic Congregation (11/77) and the opening of Baltimore's Harborplace (7/80), to two Polish concerts which brought attention to the imposition of martial law in Poland (1982, 1983). Pro Cantare also helped celebrate Columbia's 20th birthday with the Hail Columbia concert at the Merriweather Post Pavilion in 1987 for which local non-profits received all the income from the tickets they sold. That concert featured Jim Rouse's premier as a performer, when he narrated Aaron Copland's A Lincoln Portrait. The chorus also sang at Howard County's 1990 Martin Luther King, Jr. Birthday Celebration, the 1997 Naturalization Ceremony, the 2002 Howard County remembrance of 9/11, held at Centennial Park. In 1997, the CPC was featured in the inaugural concert of its home venue, The Jim Rouse Theatre, and on June 15, 2007, a group of 55 members of the Pro Cantare joined the Minnesota Dance Theatre in a much-praised, captivating staged production of Carmina Burana for The Columbia Festival of the Arts.

In addition to giving concerts at home, the Columbia Pro Cantare has performed in or near Washington D.C. (Kennedy Center, National City Christian Church, National Cathedral, National Presbyterian Church), and in Baltimore (Harborplace, Kraushaar Auditorium, Christ Lutheran Church, Holy Rosary Church, 2nd Presbyterian Church, Memorial Episcopal Church, Church of the Redeemer). In all, the Columbia Pro Cantare has thrilled more than 100,000 audience members and introduced them to some of the finest music composed in the western world.