The Rotary Club of Columbia-Patuxent has donated $6,170 for disaster aid to Ukraine.  The money came from individual club members and from a two-night “eat-in” fundraiser at The Periodic Table restaurant, which gave 10 per cent of proceeds toward the cause.

The donation was made through Disaster Aid USA, a Rotary partner organization working with Disaster Aid Europe to answer the call for Ukraine relief.  Rotary clubs in the U.S. and around the world are responding to needs for water, food, medicine, shelter and clothing.

The United Nations says Russia’s war on Ukraine has forced more than three million people to flee the country in search of safety.  Additionally, nearly two million Ukrainians have been internally displaced, making it the fastest-growing refugee crisis in Europe since World War II.

“Our club is proud to be part of the one of the world’s largest humanitarian organizations,” Columbia-Patuxent Rotary president Jim Ehle said.  “World peace and service to others are key to the mission of Rotarians here and everywhere.” 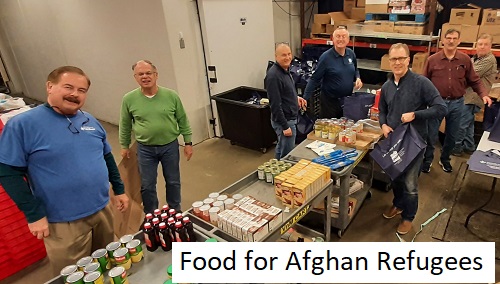 Since the fall of Kabul to the Taliban and the American military evacuation from Afghanistan, about 1,700 refugees from that nation have arrived in communities across Maryland.  They’ve been moving into Baltimore City, Baltimore County, Frederick County and Howard County, according to the national Lutheran Immigration and Refugee Service.