The Rotary Club of Columbia-Patuxent named the Rotarian of the Year at its annual meeting in July and recognized two other longtime members for accomplishment.  Rotarian of the Year honors went to Laurie Reuben, while Cliff Feldwick received a Service Above Self Award and Dushyant Patel (with spouse Palli), a Legacy Award. Presentations were made by RCCP 2020-21 president Walt Mazzell. Reuben, Club Service chair since 2015, joined Rotary in February 2010 and is a past club secretary and president. She’s also served on the Community Service Committee, Public Relations Committee, chaired the Service Above Self Award task force, and has been working with the Programs Committee to help automate the finding and booking of guest speakers for RCCP’s weekly meetings.

Mazzell said Reuben is “probably the most organized person I have met, who has an uncanny ability to ‘read a room’, is always smiling, eager to pitch in … we have spoken after meetings, during meetings, texting, e-mailing back and forth, (she) has been a sounding board for me all year.”

Reuben called her award a surprise but said “being recognized for doing what you love makes the honor even more special.”

I love my Rotary friends, those I’ve met in the club and those who’ve come into my world through my Rotary connections,” she continued. “I know that Rotary will always be an important part of my life.”

Mazzell said that Feldwick’s Service Above Self Award recognizes his record as “a standout Rotarian for many years and a standout member for many volunteer activities over the years.” 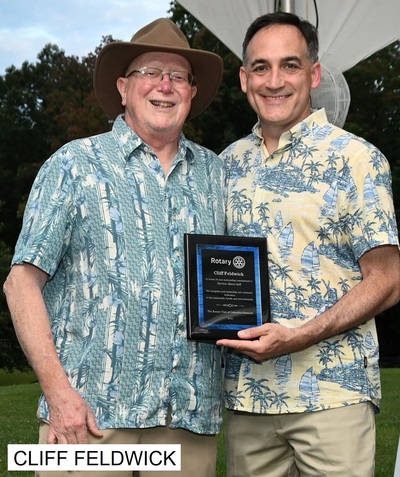 “Most recently, Cliff has been our Program Chair for about five years,” Mazzell added. “This is a crucial role in our club, keeping the weekly speaker series on track.”

Patel is a founding Columbia-Patuxent Rotary member and was one of five who contributed seed money for the club’s charitable endowment which now totals nearly a quarter-of-a-million dollars, Mazzell noted. Patel also is a Major Donor and Paul Harris Society contributor to Rotary International. "Dushyant is very active, attends meetings, participates in our hand-on projects,” Mazzell said. “He is a model Rotarian, who has really dedicated his adult life to Rotary.  His contributions throughout the years are more than I can count.”